The 2nd tallest skyscraper in the city of Seattle, 58-story Rainer Square Tower was completed in 2021, and is the tallest building built in the city since the Columbia Center in 1985. Designed by architecture firm NBBJ, the urban catalyst features nearly 200 luxury apartment units, 750,000 square feet of Class A office space, 30,000 square feet of retail space, and can accommodate over 1,000 vehicles. Located on Union Street between 4th and 5th avenues in the heart of the central business district in downtown Seattle, the design of the new tower was focused on creating a unique, vibrant environment while preserving views- seeking harmony through design. The sloped structure, slender at higher levels and wider at the base, combines panoramic views with a distinct, cascading elegance that is both functional and energy efficient.

The base of the tower features several structural glass walls at the lobby elevation designed and engineered by Sentech, in collaboration with NBBJ. The structural glass fin walls and vestibule total over 2,500 square feet of low-iron, tempered insulated glass units, with the largest panels spanning close to 20 feet in height by 5 feet in width. The system utilized Sentech’s VetraFin-G Series. Some of the key challenges during the design and engineering phase of the project came from the relatively high seismic considerations unique to the Seattle region, and subsequent deformation conditions that had to be addressed in collaboration with the structural engineering team. As part of this effort, Sentech developed a system of slide bracketry that allowed 4″ of movement in either direction at the jamb conditions to accommodate building movement and avoid any clashes with the scope of structural glass walls. 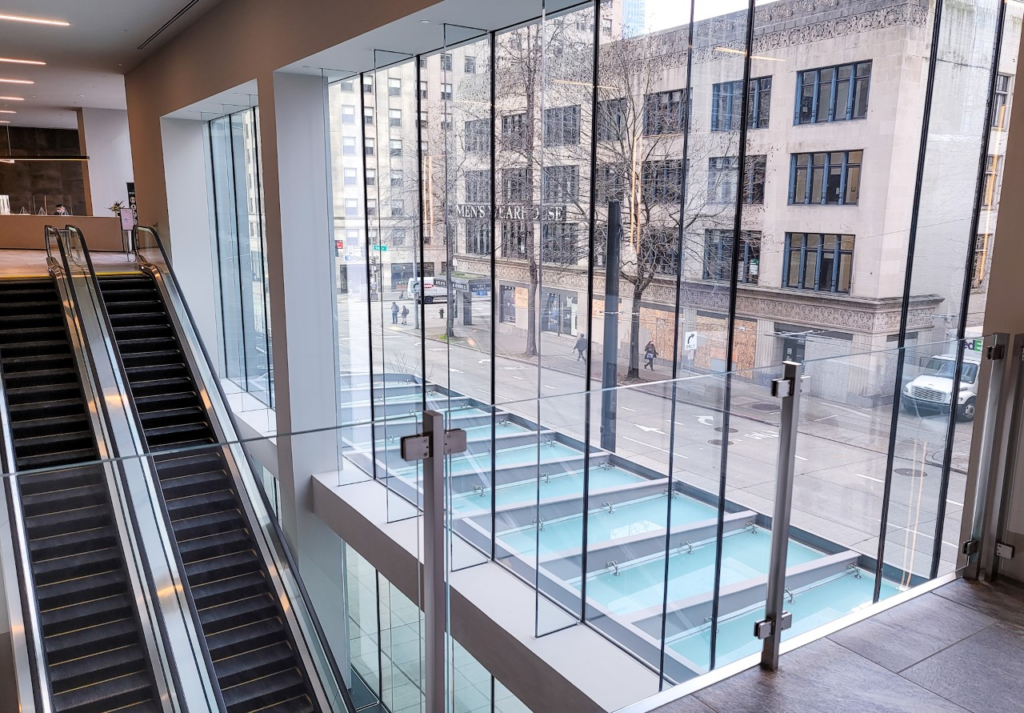 Now occupying a prominent position on the Seattle skyline, Rainer Square tower’s innovative and forward-thinking design and strikingly modern silhouette brings a sense of renewed vitality to the city of Seattle, a striking vision from the street or the sky.