After a year of hiatus, Art Basel- one of the world’s preeminent art fairs- has returned to the Miami Beach Convention Center for the first time since 2019. The Swiss international art fair, staged annually in Basel, Switzerland, Miami Beach, Florida, and Hong Kong, was founded in 1970 by Basel gallerists as a global platform to connect collectors, galleries, aficionados and artists. Attracting more than 80,000 people to Miami annually, it is North America’s largest and most preeminent international art fair, and has become the anchor of the booming Miami art scene. Considered the most important cultural and economic event in the city, this year’s fair features over 250 galleries from 36 countries and territories, showcasing works by over 4,000 artists. 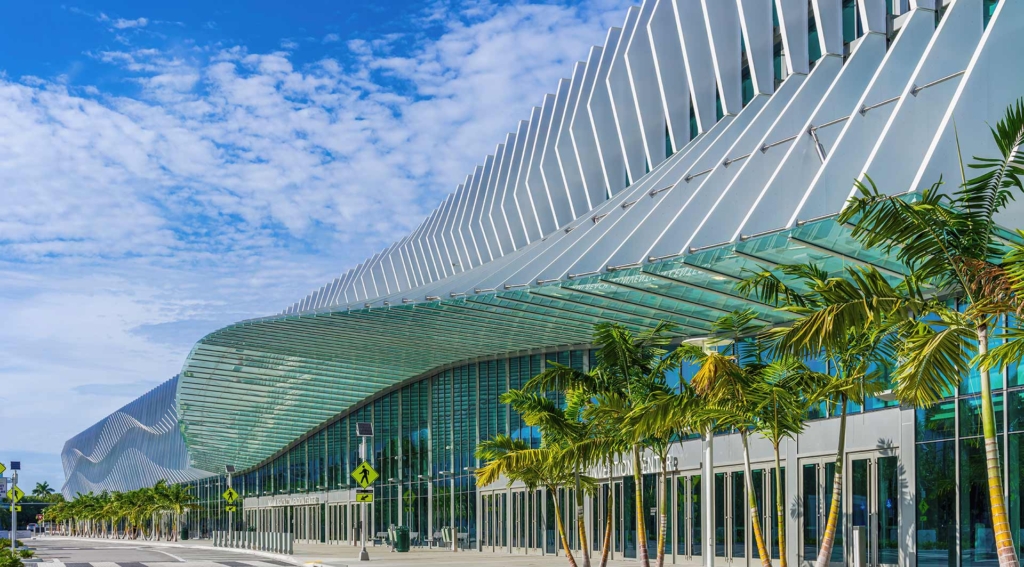 The three Art Basel locations are highly symbolic, and in total, attract up to 300,000 visitors annually. The Miami Beach edition of Art Basel first became an annual fixture in December 2002. Miami was selected as the ideal twin location of the Swiss Basel fair due to its position at the crossroads between North and South America- symbolically bridging together North and South. Hong Kong was selected as the third edition in 2012, as the city symbolically sits at the junction between Eastern and Western culture.

With a key focus on strengthening the local art scene, location and venue was key- and the redesigned Miami Beach Convention Center provides the world-class venue fit to host a fair of the caliber of Art Basel. In fact, the fair’s impact is so important that the redesign and reconstruction of the Miami Beach Convention Center was scheduled to open in advance of the 2018 Art Basel Miami Beach. In 2016, the City of Miami Beach selected Fentress Architects as the lead architect for the $620 million renovation of the 1.435 million square foot redesign, in collaboration with Arquitectonica (associate architect) and West 8 (landscape and urban design). The redesign incorporated a 500,000 square foot exhibit hall, four new ballrooms and over 127,000 square feet of new event and meeting space. Twelve acres of green space and 1,287 trees were added, increasing the previous acreage of the 25-acre campus by over 200% in an effort to integrate a healthy environment and culture into the mostly residential neighborhood. The Miami Beach Convention Center was also repositioned as the most technologically advanced convention center in the United States.

The context-driven designs most noticeable feature is the exterior envelope, on which Sentech Architectural Systems collaborated with Fentress and Harmon Construction to design, engineer, manufacture and supply materials for the decorative façade application and overhead structural glass entrance canopies. An ode to the surrounding elements of nature- the nearby ocean, beaches and aquatic life- the exterior façade consists of more than 500 angled fins, each one unique, constructed out of aluminum plates. The fins, braced to the structure and tied together with stainless steel struts, serve not only as a decorative and shading element, but also serve to combat lateral loads from hurricanes (hurricane-resistant connections) and account for acoustical vibrations. The cold bent structural glass canopies further morph into the dynamic movement of the façade. Together, these elements create a sweeping, wave-like undulation throughout the entirety of the energy-efficient and hurricane-resistant façade.

This week, we welcome Art Basel back to Miami and watch as the Miami Beach Convention Center- the city’s crown jewel- comes alive with artists, galleries, collectors, and aficionados alike. The fair is open to the public from December 2-4.